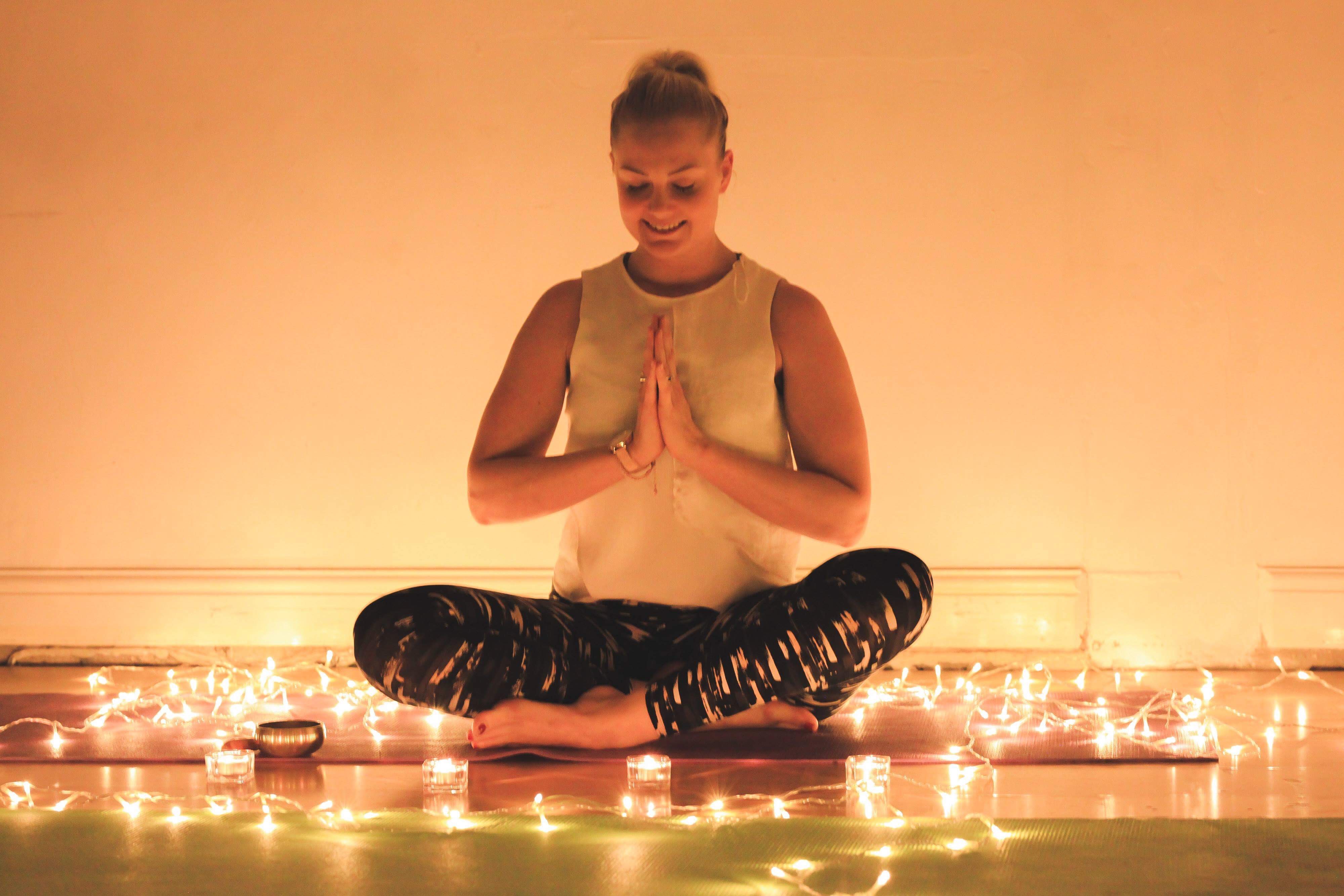 There are a lot of common misconceptions about yoga. You may think it’s only for certain types of people; perhaps those who are particularly flexible or only for females. Whatever you assume, it’s probably wrong! The word yoga encompasses many different forms of itself from bikram, performed in 105 degrees heat, to prenatal, which adapts the poses for expectant mothers. Yoga has something to offer everyone.

Yoga incorporates physical, mental and spiritual practices. It promotes relaxation through meditation, acting as a stress reliever and enabling us to focus on ourselves. With stress levels reaching record highs, it’s not surprising to see yoga workouts rise in popularity.

I attended a candlelight Yin Yoga class, held by Maria at Fortunata Yoga in London. Yin Yoga is a strain of yoga which involves seated floor poses being held for a longer period of time than you would expect usually in yoga.

As someone who occasionally attends a more generalised type of yoga class at the gym, I was keen to try a different type of yoga class to see how it could be beneficial to both mind and body. I had no idea what to expect but Maria was very warm and welcoming, and I instantly felt relaxed. The first thing I noticed was the ambiance that was created by the candles and fairy-lights. It was very calming and really set the mood for the rest of the class.

Maria’s classes are each focused on the different elements, concentrating in this session on water. Water is connected with the kidneys and urinary bladder meridians; Yin Yoga stimulates these meridians releasing stagnated energy. Water nourishes and lubricates our bones and joints. We disturb the kidneys and water element by overworking, overthinking and also by what we put into our bodies (particularly over the Christmas period!). The theory behind it is that by connecting with the water element, you go with the flow and learn to let go of daily struggles.

Yin Yoga focuses mostly on the lower parts of the body and poses are generally held for up to 5 minutes. We worked through a number of poses in Maria’s class including the Dragon Pose, Shoelace and a spinal twist. The Dragon Pose and the Shoelace focused mostly on the hip flexors. This really helped relieve the tightness in my muscles caused by running. As someone who is training for the London Marathon I will definitely be making this a regular part of my routine!

As well as being a great accompaniment to training, Yoga has so much more to offer. Having previously suffered with depression, yoga was recommended to Maria as something that could help. 3 years down the line and Maria is now a qualified teacher of Yin Yoga, who also does 1 to 1 classes. You can really see the connection and passion that she has for something so close to her which has helped Maria through difficult times.

One thing I really enjoyed about Maria’s style of teaching was how she held the poses with us throughout the class. I’m no yoga expert so it was really nice to be able to see what you should be doing and how the poses should look. I normally find myself searching around the room to see what everyone else is doing! By practicing the poses with the yogis, Maria was able to explain how everything should feel at the time, ensuring that we were all getting the most from the class.

Personally, I left the class feeling much happier and relaxed. Not only did it help with my muscle soreness but it really made me feel good about myself. I stopped thinking about the stresses of everyday life for the hour session and started feeling. There are so many benefits to regular yoga practice. Not only does it help with sports training and relaxation but it’s a great way to incorporate exercise into your everyday life.

For more information on the Yin Yoga classes at Fortunata Yoga, visit their website; https://www.casafortunata.org/

One Reply to “Yin Yoga; how did it benefit me?”