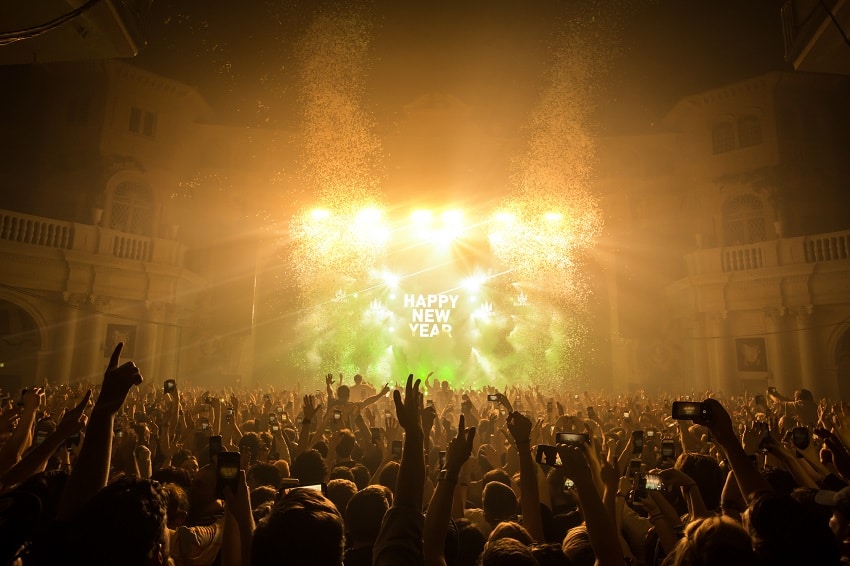 New Year Eve can often divide the group – do you celebrate at home or go out? I decided to go to Playaz in one of London’s most popular venues, Brixton Academy. I wrote this article for Decoded Magazine. The original can be viewed here.

Most Londoners would describe New Year’s Eve in the city as overpriced, overcrowded and overall, distinctly average. With most venues charging almost double their standard entry fee and the queues at most bars being twice as long, it’s no wonder that people are resorting to celebrating in the comfort of their own homes. Nothing beats a good line up though, and with the drum and bass legends that Playaz had to offer, it was a no-brainer! As well as an epic selection of DJs including Hype, Hazard, My Nu Leng, Mampi Swift and Danny Byrd, the tickets were a real bargain. With early bird prices starting from £30.75, Playaz was a great way to see in the New Year without breaking the bank!

We arrived before 11 to avoid disappointment; no-one wants to be stood in a baltic queue when the clock strikes midnight! And, whilst the queue appeared to be big, it wasn’t long until we were greeted by a rather intimidating pooch at the front of the line! Previous trips to the O2 Academy in Brixton have taught me to travel light. The wait for the coat room can take up to an hour and with that in mind, I’d rather freeze! No time wasted, we went to check out the set times. Unfortunately, these weren’t posted prior to the event and I was gutted to discover that one of my all-time favourites, Danny Byrd, had opened the night at 20.30.

To drown my sorrows, as I missed Danny Byrd and because I was sad to see the back of 2017, we grabbed some drinks from the bar and headed straight to the dance floor. The atmosphere inside the main room was electric! Hype and Hazard’s set started just before midnight which built up to a 30-second countdown led by IC3. At midnight the confetti cannons were triggered, glitter fell from the sky and the crowd went off! A spectacular like this could definitely not be replicated indoors!

After the countdown, Playaz really stepped up a gear. Throughout the night the DJs played huge tunes. Benny Page B2B Potential Badboy, Randall B2B Die, Playaz All-Stars (Annix B2b Sub Zero B2B Taxman B2B Tyke) and My Nu Leng followed on from Hazard and Hype. No rave would be complete without Hype’s classic remix of “Ready or Not” and Hazard and D*minds “Mr Happy”. Skream’s (let’s get ravey) remix of “In for the Kill”, a track which came onto the scene at the same time as myself, was also dropped!

We remained on the main room dance floor and raved all night long to tracks like My Nu Leng “Midnight”, Upgrade & T-I “Shot Down” and Clipz “Ugly VIP”. I appreciate that I should have paid more attention to which track was in played by who but I was far too busy loving life at the time! One of the highlights was Bad Company ft Messy; they were the penultimate act and kept the energy in the room high, even playing a favourite of mine, Demo and Cease “Ladies Night” (Drumsound and Bassline Smith VIP). Clipz closed the night and what a night it was! We seemed to lose track of time and before we knew it, the night was over. It came and went almost as fast as 2017!

A combination of sick drum and bass, lights, lasers and fellow ravers made this an unforgettable end to the year. With “Hype, Hazard, Hazard, Hype” still ringing loud and clear in my ears, I jumped on the night tube home, knowing that I had started the New Year as I meant to go on.

And fortunately, I don’t have too long to wait! Playaz next event is on 10 March 2018 at Printworks in London! Check out the lineup and purchase tickets here.