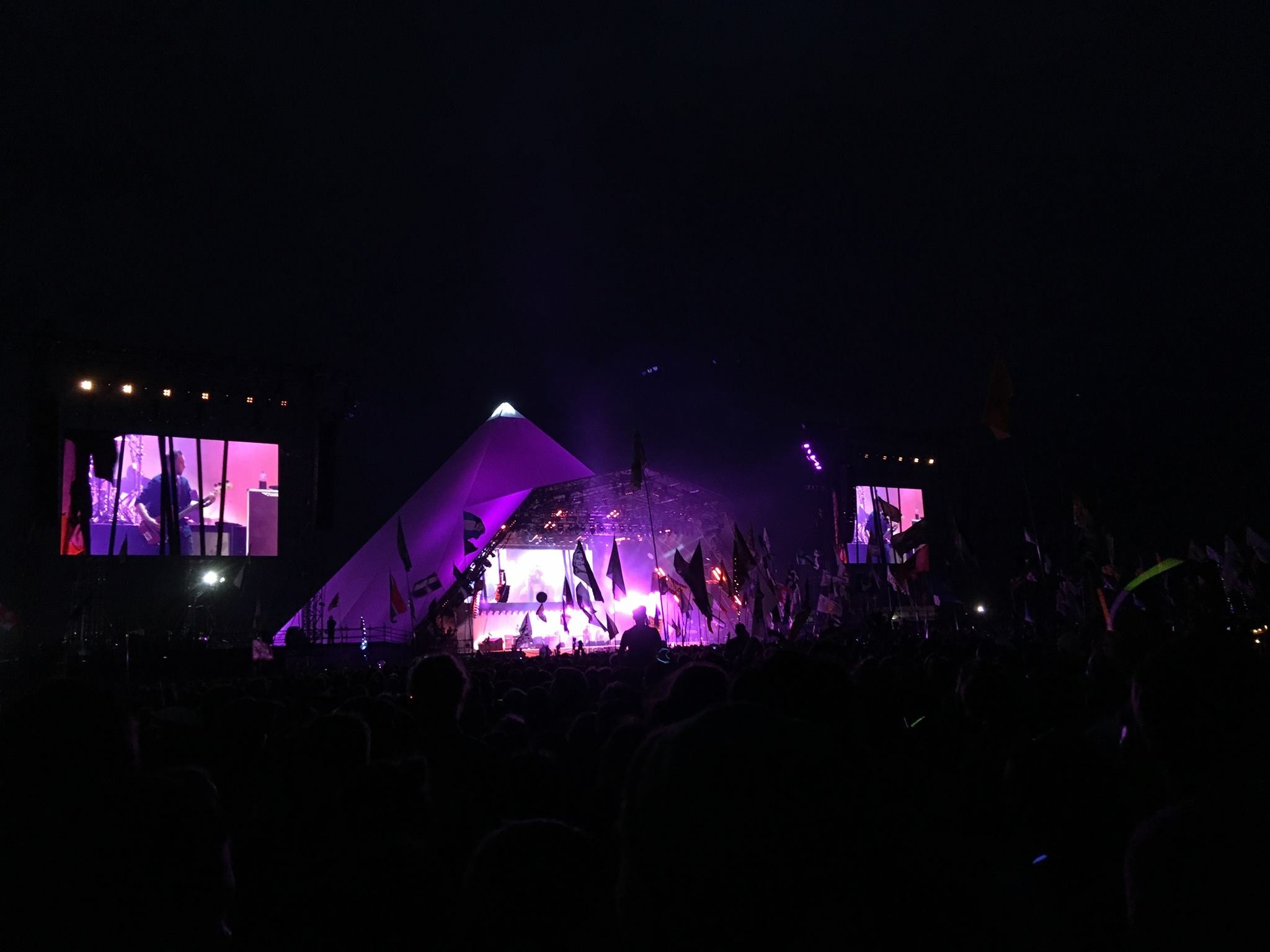 I was fortunate enough to be able to experience the amazing Glastonbury Festival first hand this year! This article was originally written for Decoded Magazine and can be viewed here.

Glastonbury Festival goes without explanation – if you haven’t heard of it you must have been living under a rock. It’s the world’s largest greenfield music and performing arts festival, stretched over 5 days and set amongst the rolling hills of Worthy Farm in Somerset. The sheer size of Glastonbury makes it impossible to visit every tented wonderland and if you have ever attempted to plan a line up using the festival’s app, you will have realised that you won’t get to see everyone you wanted to see (unless your music taste is very limited. Then it may be possible). I’ve visited various festivals globally, but nothing I have ever been to is on par with this giant! The trick to having a great Glastonbury is to be open-minded. As you can imagine, the majority of the weekend was a blur and I ended up seeing way more artists than I could possibly remember…

Having secured coach package tickets for this year’s festival, our departure time was at the unholy hour of 5.30am. Despite complaining about the early wake-up call, we were very impressed when we had set up camp by 9 am! Contrary to previous years, the travel horror stories appeared to be a distant memory. This year temperatures were at a record high – the land was dry and our coach arrived in good time. Thanks to See coaches having a separate queue, we skipped the mass of the car, train and other coach travellers, and we were on site within 20 minutes. Finding a camping spot became our next priority. After lugging 10 litres of alcohol, camping equipment and my exhausted self around the country, I was more concerned about when I could crack open a beverage and was quite happy to settle close to the entrance. We opted for Michael’s Mead, situated between the famous Pyramid and John Peel Stage. Tents pitched, the rest of Wednesday was about exploring and getting our bearings. Most people head up to the stone circle where the festival usually hosts a number of extravagant firework displays. Previous years have taught me not to hit it too hard on the Wednesday!!!

Thursday provides an excellent opportunity to explore and familiarise yourself with some of the smaller stages as they start to open up. Spanish party brand, Elrow were doing a takeover at the Lovebullets stage so this was our first port of call. Lord Leopard was on the decks, surrounded by an array of psychedelic and kaleidoscopic visuals. Having been to some spectacular Elrow events I was disappointed by the lack of confetti, glitter cannons, and inflatables in comparison, but it was still well worth a visit! A few random acts and an amateur magic show later, it was time to refuel. Camped in view of the Yorky and Hog Roast food stand, I knew what I had to do. This was probably my favourite meal from the entire festival; a Yorkshire pudding stuffed to the brim with hog roast, stuffing, creamy mash and onion gravy, this mini feast will cure any hangover. Dinner demolished, we headed off to see Nicky Blackmarket in the iconic London Underground. Based in Block 9, it’s an indoor venue built to look like a high riser that a tube crashed in to. The queue was pretty big but as always, well worth the wait! Eventually we stumbled into the Wow tent for Shy FX. This was one of the worst sets I’ve seen him play; predominantly garage, I missed his usual d&b and jungle!

We began our Friday over at the Glade where Youth and The Correspondents were playing, dancing up an appetite before heading to Hall’s Dorset Smokery for a late lunch. Tempting as the rump steak sandwiches were, I went for a brie and bacon wrap. Although expensive, the wrap was well filled with salad and other goodness required when this is to be your only ‘proper’ meal of the day. There was a good chunk of brie and lots of bacon but sadly it was served cold. Refuelled, we trekked over to Silver Hayes for the Hospitality 21st anniversary takeover at The Blues. This was a unique outdoor space built up from random panels of corrugated metal sheets. Nu:Logic’s set here was one of the highlights of the festival for me, especially when they dropped a couple of my favourite tracks, ‘Everlasting Days’ and ‘Morning Light’! The evening saw us make our way back to Lovebullets for more Elrow magic and some awesome techno from Kolsch, followed by Bicep later in the Wow tent. We spent the rest of the evening at the incredible Arcadia, a giant, fire-spitting spider where DJs such as Patrick Topping and Dusky can be seen playing from this beast’s underbelly. If you haven’t been before, you should check out the Metamorphosis show; cue dramatic music and baby spiders crawling from Arcadia, surrounded by flying aliens doing acrobatics – probably one of the most bizarre things I have ever seen! The Arcadia is one crazy, ravey beast and you must catch it in its full glory.

After a wander around the festival site, today took me back to the music of my childhood, dancing to Craig David at the Pyramid Stage, followed by a meal from our local campsite café. I was super excited when I saw a burrito on the menu (even if it was vegetarian!) but the excitement was short-lived. Located in the middle of Michael’s Mead campsite, Lulu’s cafe is overpriced and pretty naff. The Mexican bean wrap was the smallest tortilla I have ever witnessed, consisting of 5 actual beans and some salsa. But party time is limited – I decided that this would do and vowed not to go back here again! Despite the odds, the bean wrap gave me life – life to rave to Wilkinson and life to continue to the South East Corner for the remainder of the evening. On route, I heard some epic d&b tracks from near the pathway and decided to follow my ears. I stumbled across a very intimate tent – to this day, I have no idea what it was called or who was playing but it was the best set I saw all weekend. I stayed here for some time before making friends with randoms and heading over to Genosys. Described as the centre piece of Block9, you can shuffle away to acid house and techno until the early hours. We partied here for a while but the sole purpose of my night was to catch Friction and, DJ Hype and Hazard in The Temple. The Temple played host to most of my favourite DJs at the festival but it is incredibly hard to get in. Most nights there is a queue outside (I was waiting for around 20 minutes) so it is highly recommended to get there early. Hype and Hazard were amazing! I raved it up here until the early hours before taking the 30 minute trek back to the tent in broad daylight for some well-deserved rest.

The final day of the festival and the struggle was real! Sunday hosted some of the real stars of the festival. The TBA act on the John Peel Stage was The Killers but unfortunately the area became overcrowded very quickly and was cordoned off. As with any surprise guest, there is a risk that they might be rubbish and sadly this time, we missed out. Shortly after, Chic took to the Pyramid Stage featuring the legendary Nile Rodgers. This music was way before my time but who doesn’t love a bit of 70s disco to get them in the party mood?! Chic were sensational.

Moods lifted, it was time for an energy boost. On our travels, we stumbled across Biblos. I opted for the salad box with fried jerk chicken. I was offered chili and garlic sauce so obviously I went for both! Their garlic sauce was actually garlic veganaise – slightly strange considering there were no vegan options on the menu and pretty bland. However, a good dollop of hummus deflected this and it was satisfying overall. With Ed Sheeran on the agenda, we then headed back to the Pyramid Stage to join the masses who albeit older, were behaving like teenage girls. Ed may not be everyone’s cup of tea but you can’t deny that he is a talented individual. He certainly wasn’t the highlight of my festival but it was refreshing to see an act stripped back of the production and letting the music shine through. Once he’d finished, it was off to Arcadia to squeeze in some My Nu Leng and Fabio and Grooverider. With a coach to catch, we later made our way jealously past the remaining revelers.

I was ready to go home by this point, excited at the prospect of a shower and a comfy bed! Until 2019 Glastonbury…